What started as a somewhat secret event of filming live music performances over the course of a day 7 years ago, has turned into one of Cherokee Street’s most cherished events.

Lo-Fi Cherokee is back again this year to make 19 music videos featuring some of St. Louis’ top local talent as they play in various locations along Cherokee Street. What makes Lo-Fi Cherokee so unique is its ability to showcase not only the STL music scene, but also one of St. Louis’ most dynamic commercial districts; all while bringing together people through their love of music, video, culture, and ultimately St. Louis.

The event began in 2012 under the direction of Bill Streeter, a documentary filmmaker, and musician Jason Hutto.  Bill continues to lead the event today with his company Hydraulic Pictures. While the event started small with just a handful of bands and businesses participating, it has grown into a full-day event and has quite the following. Streeter told St. Louis Public Radio in 2016 that ‘if I wanted to quit doing it, I don’t think people would let me.”

The way the event works is that each musician is filmed and recorded performing in only one take and almost immediately the editing process begins. Throughout the day, fans travel up and down the Cherokee Street Business District catching performances at each stop. Previous performance locations have included a flower shop, microbrewery, bike shop, clothing store, bars and restaurants, and even a chemical safety office. At the end of a long day of filming and recording, everyone celebrates with a wrap party and the music videos are released about a month later at a separate event.

What makes the music video shooting marathon such a popular event? Everyone involved in the event from the cameramen to the musicians to the people who follow them from place to place watching the performances knows how special this event is. As told to St. Louis Public Radio, one attendee said the event was “a good opportunity to discover new bands in a situation unlike any other concert.” A cameraman participating in the event stated it’s his “most fun day of the year” and past performers maintain that the event is “necessary” for St. Louis and something they’ve “wanted to be a part of for years.”

This year’s event will take place on Saturday, April 6th from 9:00am until 7:00pm at various locations along Cherokee Street. You can view the schedule of performances below and stay tuned to the Facebook event page for updated information. And did we mention it’s free to attend any of the performances?!

The music video premiere party will take place on Saturday, June 8th at 7:00pm at The Stage at KDHX. 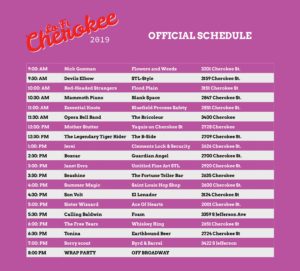