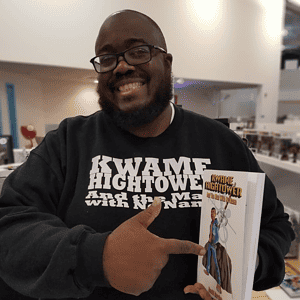 “Kwame Hightower is the main character of my graphic novel series. In the first book, he’s just a 12-year-old kid from St. Louis living in London, England, and he hates it there. We make it even worse for him by making him the king of England when he pulls the Excalibur sword from the stone. Then we send him on this crazy adventure. Readers between the ages of six and 12 are the sweet spot for this series. When they read about Kwame, I want them to know you’re going to make mistakes, you’re allowed to make mistakes, and you’ll learn from making mistakes. I didn’t want to present a character who’s too perfect that does everything right. When you’re in this high level realm as the king, you’re dealing with people who are older and manipulative, so you’re going to miss things and there’s going to be misjudgments. Kwame has to deal with that and grow into the role. But the point is, it’s a learning experience.” 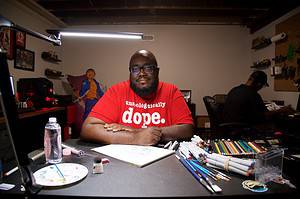 “I wrote the original script for Kwame Hightower and then I actually got downsized at my job for a while. SoI was kind of scrambling trying to figure out what I was going to do. I decided to finally draw the book and as I was creating it, I realized I couldn’t produce it in the traditional comic book manner. I accumulated all of the skills needed to create the book and I had a choice. If I wanted to publish it, if I wanted to make it happen, I had to do it myself.

When I self-published, I wasn’t thinking I wanted to start my own publishing company. I was just putting out my own books. But with COVID, I had to fully commit to this as a business model. Normally, I’m the type of person who just jumps in and says, ‘Well, now I’m swimming!’ In starting my publishing company, the whole process has been about defining everything to a tee — what we do and what we don’t do.

4 Sight Publishing creates notebooks, journals, sketchbooks, coloring books, and graphic novels. It’s a publishing outlet for my studio because I create all this artwork. And unless I present my work on social media, there’s no way to get it out to the masses. By publishing it though, I can take one of my intellectual properties and do a source book, like a coloring book for example. I get to learn about putting together a collection of works and the reader gets to know about the cast of characters and their struggles, and have fun taking their colored pencils and determining the colors. I like making my coloring books interactive rather than just something you read.” 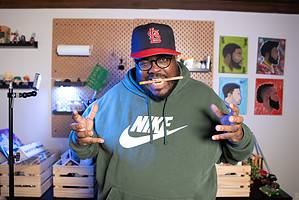 “As artists and storytellers, we get so into doing what we’re doing. The thing I have to fight against is overcompensation, which is, ‘I’m gonna do everything!’ You can burn yourself out because what we do is mental exercise, just over and over and over with no break. And when I did take a break, I was able to come back with a fresh mind. I had more ideas and I had that extra wealth of knowledge from a few years off.

When my father passed in 2006, I was working, working, working. It knocked me on my butt. I had an opportunity to move to Atlanta. When I got there, the economic downturn hit. And at that point, I had to stop. My whole brain was done. No new ideas. It’s like getting COVID and you lose your taste. I lost my taste for art. For about a three-year period, I didn’t really draw or write that much. I just ended up working for Comcast in the sales department.

After a couple years, my guys hit me up and said, ‘We’re starting Lion Force Comics. We need you to write some books.’ At this point, I hadn’t used that part of my brain for years. Now mind you, I can’t ever stop it. There’s always some story popping into my head. So I had a whole bunch of stuff I hadn’t acted on. That creative side of my brain was like, ‘Oh, I’m back in charge?’ ‘You’re back in charge.’ That side of my brain started to take over slowly but surely, and I ended up coming back into my creative self. One of the things I try to recognize now is when I’m doing too much. And I tell myself, ‘Take a break. You need to just step back.’”