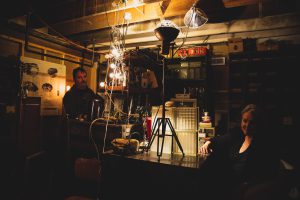 Karl: “I’ve always been a programmer, but I’ve been sort of envious of artists because they make beautiful things. So, I pretend to be an artist and maybe sometimes I cross that line with my work. I always create some sort of weird cutting-edge technology thing mixed with something that makes art fun and compelling. Back in the ’90s, I had this art installation that was cool at the time. It’s kind of boring now, but it was a simulation of water. So you’d stand in front of a camera, see yourself projected in front, and there would be water flowing over you from the projection. It’d hit your head and trickle down like in the shower. So I created this shower experience. For a while I was running it out of my RV in San Francisco on Haight Street. As people walked by, they’d see this piece of art going on in the window. Eventually, the police got called on me for parking there though.”

Lisa: “He was living in that RV when we met. He was all, ‘Come see where I live.’ And I was thinking, ‘You’re gonna murder me. There’s no way.’”

Karl: “At the end of our first date, I asked, ‘You want to come in and see the place?’ and she said no. On the second date, I asked, ‘Can I drop you off?’ and she was like, ‘Uh, here’s good,’ blocks away from where she lived.”

Lisa: “He hasn’t murdered me yet. He’s probably playing the long game.” 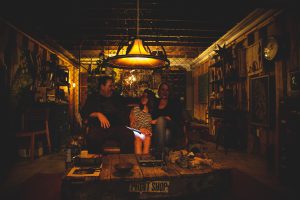 Karl: “When Lisa and I met, I was living in the RV in San Francisco and it definitely had the feel of our space at Nebula. Then we spent some time living in huts on a beach in Mexico. And when we came back to the States, we got our regular place to live. A couple weeks in, I started bringing old TVs into the house.”

Lisa: “It wasn’t a big house, it was this little apartment. And Karl figured, ‘I’m gonna make a big pile of broken TVs with glass shards and pieces of sharp plastic.’ I was like, ‘Where are you putting that?’ It was one of our first big misunderstandings… fights. He said, ‘Trust me.’ And I thought, ‘I can’t imagine this working at all.’ So we didn’t do that project, which is actually weird because, since then, I’ve realized he does make this stuff work aesthetically — and maybe more than aesthetically. And I like it. And I can trust him. He might have an insane idea, but let’s see what it looks like. I probably should have let him do the TV thing.”

Karl: “I spent 10 years collecting stuff I couldn’t make a TV installation with because I just had to be a grown up. Now I can’t invite our daughter’s friend’s parents over for dinner either. I mean, they don’t want to see a weird brain in a vat thing. The story goes back to our last startup, Pikazo, which was an app that takes a picture and transforms it with a particular art style. The initial concept was that we scanned Picasso’s brain and put it in that machine. We found some of Picasso’s toenail clippings, so we were able to get his DNA. But they were a little degraded, so he’s not quite right. His speech is slurred a bit, which is why we named it Pikazo instead of Picasso. So, that’s where the Nebula office came in. As soon as I could, I got some space so I could let my freak fly.” 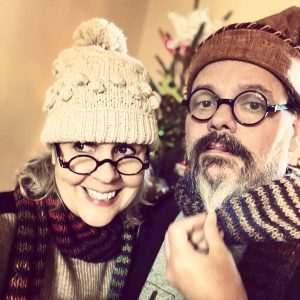 Lisa: “Not everyone loves their houses, but for those who have houses they do love, we scan images of their homes using drones or satellites or cameras and then 3D-print them into snowglobes. For the people who have always had a cabin in the woods that they went to as kids or for those who have memories of a house they grew up in but now mom has to go to a retirement home, we try to capture those places and it’s so nice to be able to make something for them. The snowglobes require more work for our customers than most things you buy on Etsy because we ask customers to try to take a video of their house. Usually, it’ll be all wrong though and I’ll have to help them figure it out. And it’s fun for me because we’re such a small mom-and-pop shop that I’m having conversations with my customers. I get to know them and they get to know me a little bit and I get to know why it’s important for them to even want a snowglobe made of their home. I dropped a snowglobe off at someone’s place the other day and they didn’t know that I’ll do home delivery. The globe was of the house they left to come to St. Louis for and to be with their daughter. I ended up spending half an hour learning about their daughter’s epileptic seizures and really getting to know the family. In the end, the mom was all weepy and gave me hugs and stuff. So I try to give good customer service and not just be an automaton behind a desk. Honestly, this is the best job.”