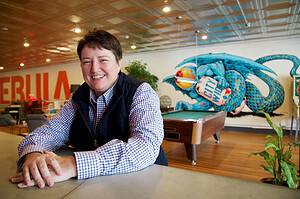 What’s something you wish you would have known when you were younger that you know now?

“I would have come out as gay sooner. I wish I would have had the courage and foresight to realize the perception of the LGBTQ community was swinging in a different direction. I grew up in rural southern Missouri. My dad was a pastor. I went to church twice a week. There weren’t any LGBTQ folks where I grew up, and there weren’t any after-school programs or support groups. I didn’t have an LGBTQ role model. I couldn’t even envision marriage or children in my future. I have both now.

‘Don’t Ask, Don’t Tell’ was passed as landmark legislation when I was in 8th or 9th grade. It was landmark because at least we were acknowledging that people are gay and we wouldn’t be fired for being gay if we could keep it quiet. Even though it was a win back then, there was still a sense of shame.

When I go to Pride parades now, the high school kids who walk in them blow my mind. They’re like 14 years old, and I think, ‘Wow! You are amazing,’ because I didn’t have the courage, strength, foresight, fortitude — whatever you want to call it — to come to grips with it at 14. I knew I was gay in the 4th grade. I’m now an employment lawyer. I have LGBTQ clients in their 50s and 60s who tell me they were out in the ’80s. I’m floored with their courage to come out, and their courage to pick up the phone and call me. Calling a lawyer to talk about discrimination or harassment isn’t easy, but those who call recognize they’re being treated differently. I’m like, ‘Man, these people know how to stand up for themselves.’”