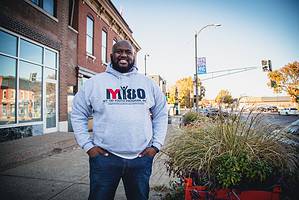 “One thing that sets My 180 and other youth programs apart is that we do respond. A lot of individuals say, ‘Hey, I’m looking for some services. I make phone calls and I never get a response. I send emails and I never get a response. But you respond. You follow up. You do what you say you’re gonna do.’ The biggest difference with My 180  is that we are a family. When the pandemic started, one boy fell three months behind in schoolwork from going to virtual school. The Mom called me so angry: ‘I don’t know how he fell this far behind!’ With me being able to work remotely, I said, ‘I’ll bring my computer over and sit at your house, and we’ll do this for a few weeks until he catches up.’ We’re laying on the floor. I’m doing my work, he’s doing his homework. And he was able to catch up on all his schoolwork.” 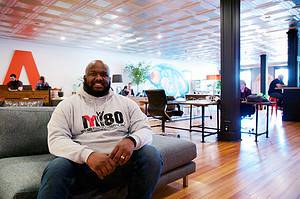 “I was working in the court system and I lost my sixth kid who died in the streets. At that point, I just said ‘Enough is enough. I quit.’ And I left St. Louis City Family Court. I’’d been to six funerals, but I’d never been to a graduation. I felt that there had to be a better way to serve communities, families, and youth. Since then, I’ve been chasing after that ‘better.’ It took a while, but at this point I have it now.  I’ve had a boy say to me, ‘Meeting you feels like I have a second dad. I just met my real dad and now I have two.’ Another boy said, ‘I’ve never had an opportunity to be this close with another male and to just talk and for me to learn as a young man how to respond to things.’ Then another one said, ‘Roy, you far surpass all my family members in the things you’ve helped me with as far as employment and clothes for my interview.’ These conversations with parents and youth are moments that confirm I am on the right path.” 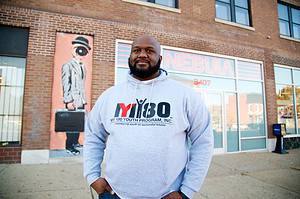 “I had my first graduation this year. I met this young man in 2016, so this is my longest match. He’s 20 now, and even though the program is over, we still meet. When he got his cap and gown and diploma, he said, ‘I don’t know how to feel.’ I told him, ‘Well, I’m proud of you, man. Do you want to take some pictures?’ And he said, ‘Yeah, I’ll take some pictures.’ Getting his picture taken, you could tell he was really proud. That’s one of the most emotional moments I’ve experienced in this work. In the car afterwards, I said, ‘Regardless of how you may feel, I know what people say about how men are supposed to act, or whatever. But I just want to say I’m proud of you. And I’m happy you graduated. ’ I said, ‘Dude, this is a big milestone for you.’ We’ve talked about community colleges and he wasn’t sure. We’re working on his self-esteem too. I told him, ‘I went to school. Single parent and two younger brothers in a one-bedroom apartment in North City. If I can do it, you can do it. You got my support. I’m not going anywhere until you tell me you’re done with me.’ It’s important that our young men are affirmed. So often youth hear what’s wrong with them, but they rarely hear anyone speak positive affirmations about them.”