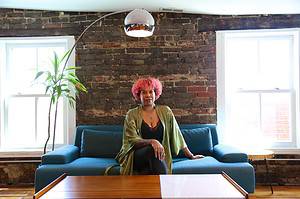 “About five years ago, I was out there doing my thing, putting stuff out. Feelings of anxiety and depression were simmering in the background even at that time. A series of emotional and physical issues turned up the heat. I was dealing with a foot injury that made keeping up with the day-to-day tough. I was also processing the grief of losing my father. I stopped taking care of myself, and after months of staying in bed, it became apparent that I needed to focus on self care. I started creating herbal, natural potions to nourish and replenish myself. As I worked with them, their alchemy was revealed. Sharing them with others is their true magick, and that is how Blk Mgk Woman was born.

And now I’m coming out on the other side of that dark place. Even though I’m not totally there, I can feel that residual energy touching me from the future. There’s this perpetual whispering — sometimes shouting — of the universe: ‘Hey, girl. Adria! Come on, girl. You can do this.’ It keeps driving home that I need to be doing the full breadth of my talents — art, music, magick. Those are the three big pots I have on the stove and it’s a lot of pots. But they’re all for the same meal.” 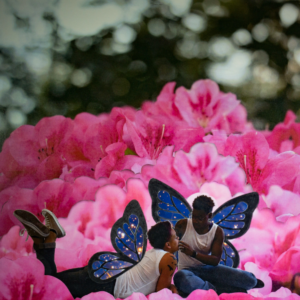 “The last art show I had was for Black Butterfly. I took photos of flowers and plant life between here and Chicago, and then I photographed all Black folks to create a series of eight pieces with butterfly wings on everyone. I’ve always had a thing with butterflies and the whole process of becoming a butterfly. Then there’s all the imagery of freedom and flight as Black folks. There was a quote I used, too: ‘Where can we be BLACK? Where can we be FREE?’ And I made the people look small compared to the flowers because they’re meant to be like butterfly size. They all look like they’re in the wilderness or in a rainforest. And, literally, where can we be free? Because there’s so much shit going on keeping us from doing that. Everybody looks like they’re at peace in the pictures, especially the ones with the couples and where the moms and children are embracing. There’s one with my friend and her teenage daughter where she’s embracing her child and looking directly at the camera and she gives this look, like, ‘This is my baby. Just, don’t.’ And then to have all the greenery behind them and everything, it just gave the sense of them in their space — a place where they can be themselves and, like, ‘Don’t fuck with this groove.’”

“When I turned 30 I felt like a badass. I was like, ‘You can’t tell me nothing!’ And then, in the last 10 years, a lot happened. A lot of good stuff, but I was in a really dark place for a while just from the cycles of life. And now I’m coming out on the other side. Even though I’m not totally there, it’s good I can finally see it. I can feel that residual energy touching me from the future. I can feel it coming. There’s this perpetual whispering — sometimes shouting — of the universe: ‘Hey, girl. Adria. Come on, girl. You can do this.’ My kids are 20 and 21, and I feel like I’m getting my own lessons back. Like, the stuff I’ve given to them, they’re giving back to me now and it’s just very cool. My wife and my kids are just incredibly supportive and understanding of all my shit, because there’s a lot. And they just want me to be great. They just want me to be doing what I’m doing because they see the vision and they just want to support me in getting there. I’m  not there, but I’m getting there.”