Karl Stiefvater is a visual effects artist with over 20 years experience in the field of computer graphics. He has worked on games and film, in academia and the industry, with traditional and real-time rendering. Karl’s accomplishments include: effects for the Nebuchadnezzar destruction sequence in Matrix: Reloaded; the swarming sentinel destruction effects used throughout the battle sequences of Matrix: Revolutions; procedural generation of the infamous bottomless pit from 300; the then-groundbreaking HDR lighting shaders for Riven: The Sequel to Myst; those shaders and others developed into the LumeTools shader collection; teaching graphics courses at Washington University; the interactive exhibit Waterworks shown at SIGGRAPH 2001; working on the infrastructure of the metaverse for Second Life.  Most recently Karl has been teaching a series of online courses in visual effects programming. 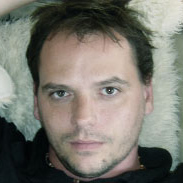 Karl grew-up in a funeral home; he owned/ran a cafe on a naked beach in Mexico; he lived on the streets of San Francisco in a 1970 RV. His seven-year-old daughter Lily is the smartest, funniest, and most beautiful girl ever born (except for his wife.)